What financial domination REALLY is

Financial domination is a sexual fetish, part of the same dominant-submissive dynamic we all love so much. The submissive finds pleasure, relief and even happiness in offering money to his lady Mistress.
The findom fetish is becoming more and more popular especially the past 2 years. The reason for that is quite simple, as the number of new women interested in practicing domination increases.

That would be wonderful news, if only the women in question were true to the cause and honest lovers of the BDSM. As many of you might have already figured out, most women practicing domination nowadays only do it because they heard of the existence of financial domination and they use it as an easy source of income.
Is that ok? Well...no! Of course everybody is chose to live their lives as they please, bit I am mot commenting from the standpoint of a professional Domina, a true believer in the essence of d/s. Just wanting to obtain money for free is not a fetish. Just asking men for money is not a fetish! Hell I bet your wife asks for money too and loves to go shopping, doesn't she? Does that make your wife a Dominatrix? No.
What makes a Domme is the genuine love for domination, for bringing a man to his knees and into submission, for control. The real dominant draws her happiness and excitement from the power of control, from watching her slave make efforts for her, from knowing she is truly respected and obeyed.
A real Findomme draws her excitement not so much from the amounts of money, but from the thrill of observing the man give into her and wanting to offer his hard worked money as a sign of worship or even humiliation. Whether it is 10$ or 1000$, it shouldn't matter; not from the perspective of obtaining the genuine thrill, the Domme-gasm as we call it.
At the foundation of the findom fetish is not how much money you get, but how much devotion you get, how much genuine sacrifice your slave is making purely because his Mistress' needs comes first.
A simple example: let's say a poor slave offers 100$. And a rich slave also offers 100$. For the poor slave the amount was a real effort, he has to economize, he has to cut off from his other pleasures/own needs in order to offer that 100. For the rich slave that money is nothing; he doesn't even "feel" it in his pockets. Now, in this situation a REAL Domme will be much more satisfied with the 100 she got from the poor slave because he is the one who actually made a sacrifice for Her. A fake Domme will be equally happy with both guys and not even NOTICE the difference in the context. For her both 100s are equal.

I am not saying pay less, this is NOT a free pass for you loser bitches to ease up on the drains! Your duty as a servant is to always  do everything possible to offer more and more to your Owner(
whether it's money, gifts, your tears, your holes...whatever She wants).
What I was trying to point out is the difference between gold diggers and a true Domme. The difference between superficiality and pure love of domination. The difference between begging and deserving!! 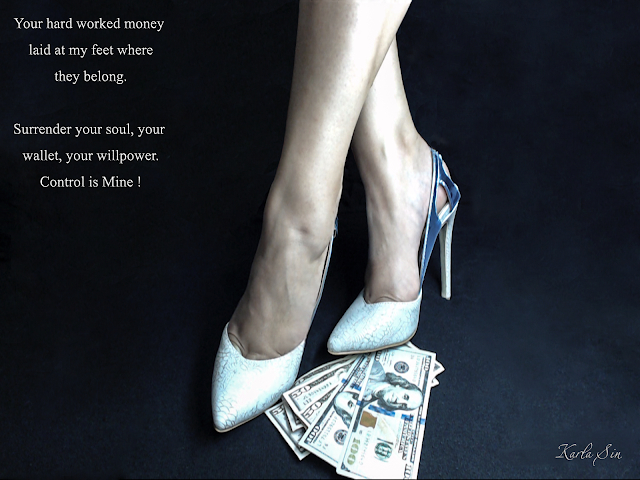 Another aspect of findom is the Mistress' love of controlling the finances of her submissive. Not only receiving money & gifts, but also getting a say in how/when the slave spends his salary. Micro management.

I have been a Findomme for many years now. Have played with many slaves; good slaves, less good slaves, etc. But I am most satisfied with my servant Nina( who I discovered to be not only a sissy but a genuine trans and then the doctors confirmed). He enjoys several fetishes, but the past years he has become more and more interested in findom. At this moment he is a true, complete, devoted financial slave on top of also being Owned. And this was gradual, this only became 100% real and satisfying the moment he truly let go and accepted himself for who he is. He wakes up thinking of how better to serve me and he goes to bed thinking of what more he can do for me.
It is natural for every submissive or slave to initially struggle with his fetishes and identity. That is because we carry the burden of the society stigma, of what they tell you is "good", of how everyone wants to control your life(not in the fun way) and tell you what you should like, how you should behave, etc. You know that's bullshit.

Going back to my slave, who has been for a few years my owned slave( almost 8), I am going to show you some of our conversations( I made a collage of print screens), as I believe the words of a fellow slave might be the best way to show you guys what truly means to he a happy slave and a happy Findomme. 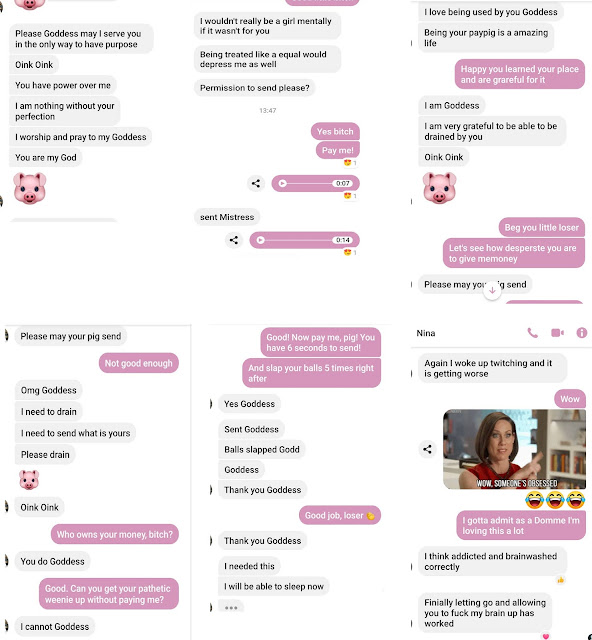 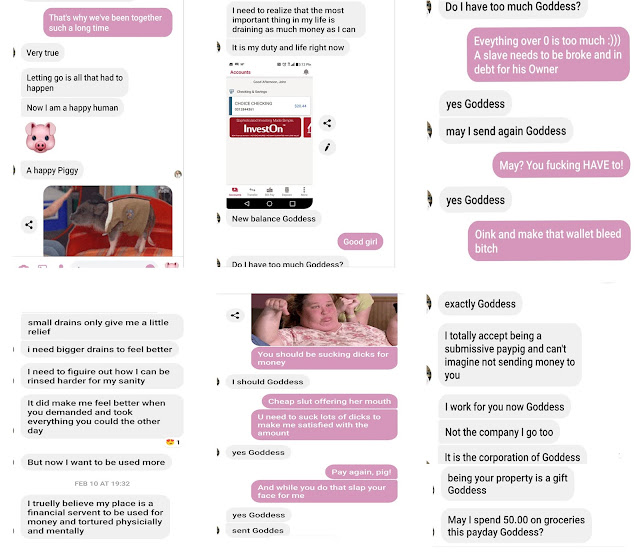 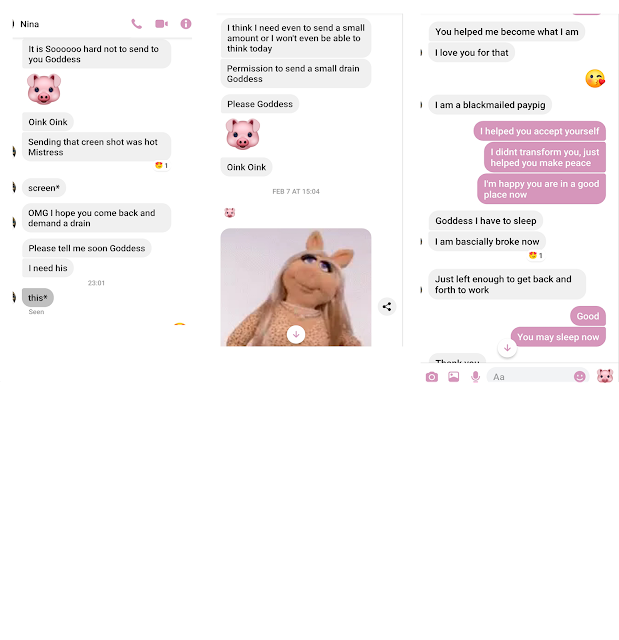 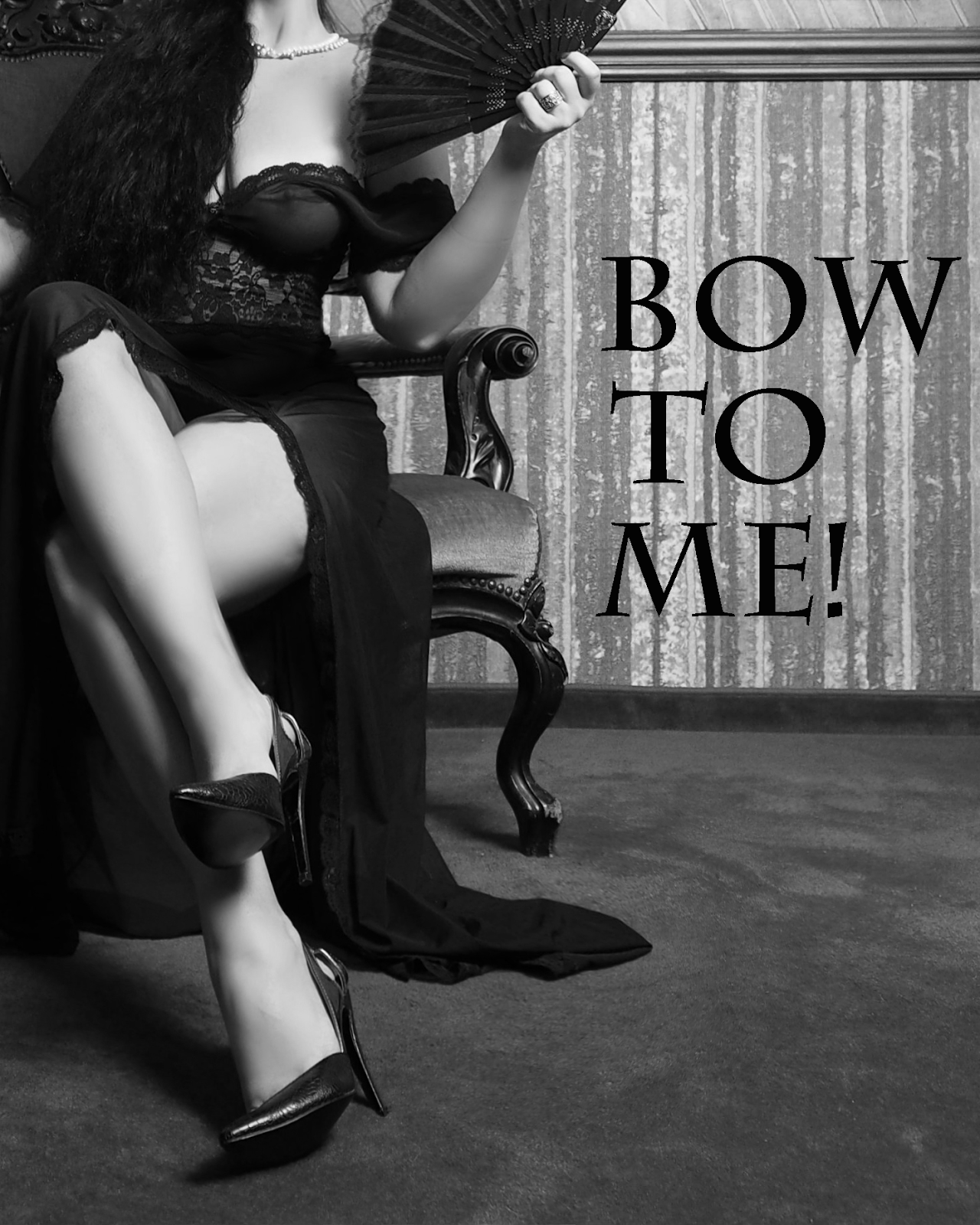 
I am a sophisticated lifestyle Domme. To me, this is not mere play, it is who I am. I enjoy using men and their finances for my own pleasure, controlling and re-educating them.
When you enter My world, leave your pride, your ego, your dignity ; forget all about your manhood ; forget being in control ; forget having any power ! I will bring you under My control, EXPLOIT and HUMILIATE you like the pathetic little worm you are. I can train you and mold you into anything, and there is nothing you can do about it !

You will suffer...and I will enjoy it !